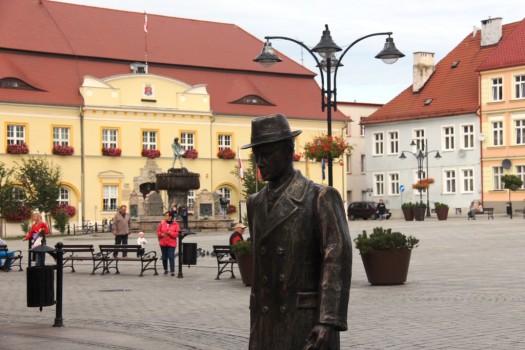 The melodic tune of an accordion welcomed us to the medieval streets of Darłowo this morning, after a scenic drive from Mielno. With a long block of time set aside to explore the town, we were intrigued as to what we might discover, and wasted no time in finding out. Flowers were in bloom and the atmospheric town had charm in abundance.

The seaside town, which was once fortified by a large wall, was first established in 1270 and is now called home by some 15,000 inhabitants. Darłowo has maintained its medieval layout, with narrow roads surrounding a central square, which is regularly used for markets and cultural activities. I particularly liked the statue of the former Mayor, Miejskie, which stands adjacent to the main square, and depicts his businessman-like dress and purposeful walk, as he strides down the town’s main boulevard. 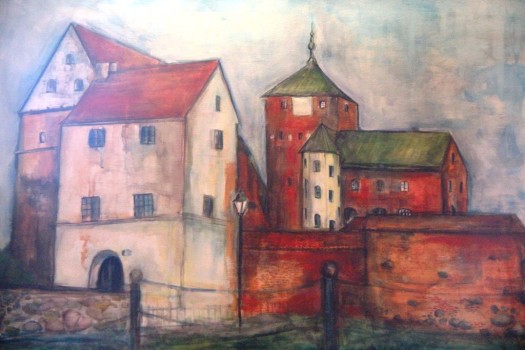 The town’s castle, which was built in 1352 and remains the best example of a Gothic castle in West Pomerania, inspired King Eric I – who occupied the castle in the 15th century – to build a similarly designed abode, named Kronborg, in Denmark, which later became the setting in William Shakespeare’s Hamlet. It seemed only right to visit here first.

The inner courtyard gave a perfect view of the entire castle, which towered above head in each direction. Marcin and I began climbing narrow staircases to reach the castle’s keep, which sat overlooking the passing Red River Hog, and allowed fantastic views over the town and the surrounding countryside. Like kids in a toy shop, we rushed back downstairs to learn about the history of the castle in the museum, which occupies part of the building. Gothic style furniture occupied the various rooms and hallways that formed the main part of the castle. We saw a mummified cat, which was discovered in one of the walls of the castle, and, for some reason, a double-headed calf! From the grand banquet room to the ornately decorated chapel, we soaked up everything that the castle had to offer, before descending underground to view the dingy jail cell. 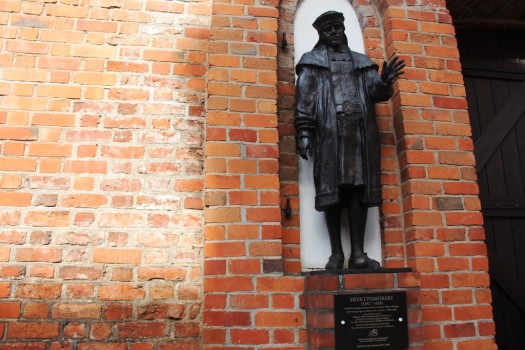 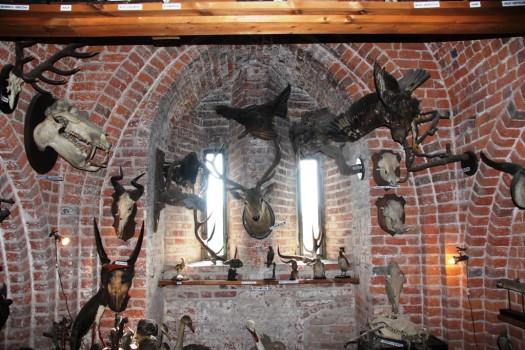 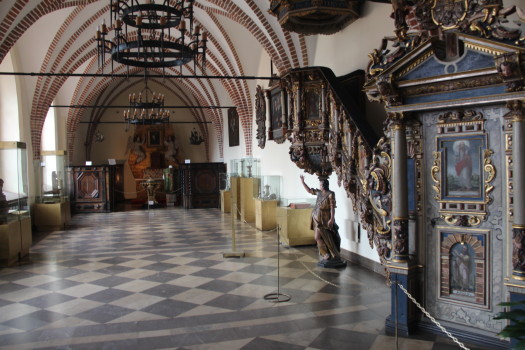 We left the castle, walking through the main square, past the interesting homage to the local fishing industry, to the main church in the town – St. Mary’s. King Eric I lays to rest in a sarcophagus in the church, just a stone throw for his former residence. The church, having been recently renovated, was so impressive from the inside; just look at the lavish organ! 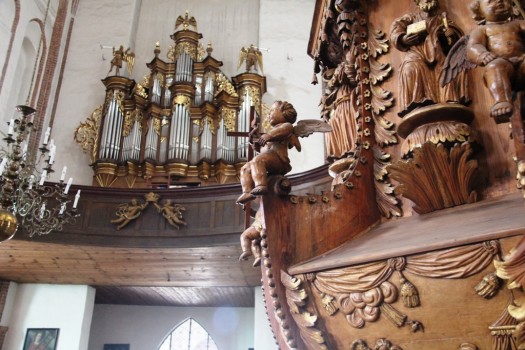 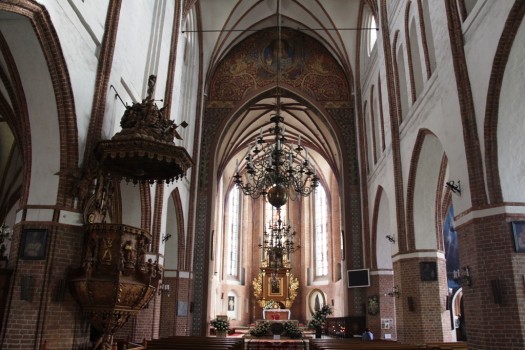 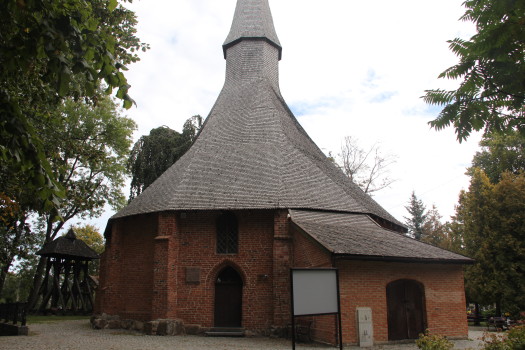 The second of the churches on our tour was a Scandinavian style church, which was extremely unusual in its appearance. Grey wooden tiles, which were built into a spike – resembling some sort of Viking helmet – covered the simple structure. Inside, the detailed ceiling paintings were being carefully restored. It seemed that a great deal of money and effort was being injected into the town to improve it’s appearance.

Lunch at Gościniec Zamkowy, or Castle Tavern, which was also to be our accommodation for the evening, was a sumptuous affair and comprised three courses of fine, traditional Polish cuisine. Much like the castle, the decor resembles a noble residence of centuries ago: gilded frames home Romantic depictions; ageing wooden furniture invites one to sit; and interesting trinkets adorn the surfaces. 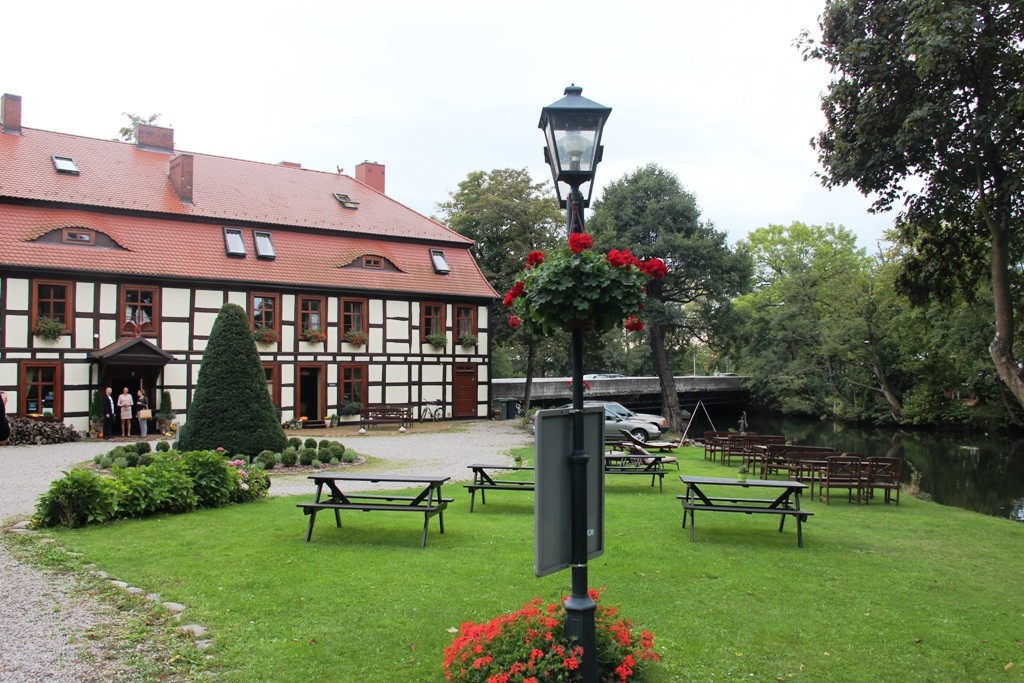 Thoroughly replenished and raring to go, Marcin and I met our tour guides and headed for Leonardia – a kind of play centre, formed of over 100 wooden attractions which were based on the simplistic games of Leonardo Da Vinci’s era. Once again,Marcin and I embraced our childish sides and battled it out on a range of fun activities. The owner, Darek, was interested in the works of Da Vinci and so dedicated his park to the inventor’s memory, intending to inspire young people to be creative outside of virtual computer games etc. A great time was had by all, as we ran excitedly from game to game. 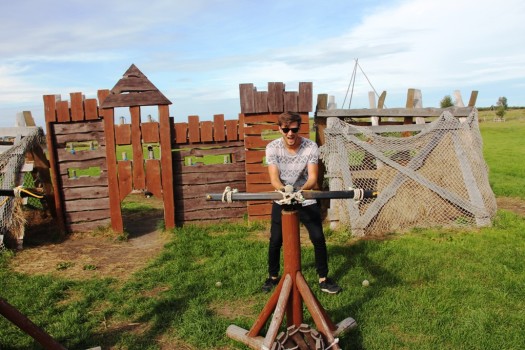 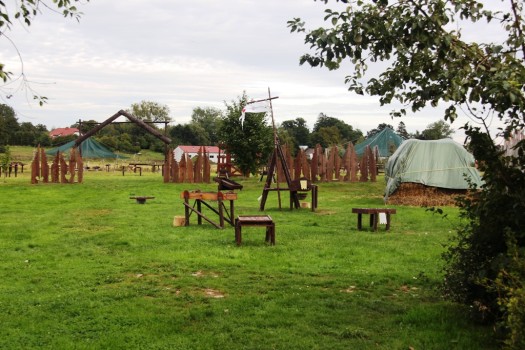 Finally, we headed for the port area in Darłowko Zachodnie, just a short drive from the centre of Darłowo. I was immediately struck by the resembled between Darłowko Zachodnie and my hometown, Hastings, with regards to industry and seaside culture. Although relatively quiet for the low-season, there was still a great deal to see and do in the area. 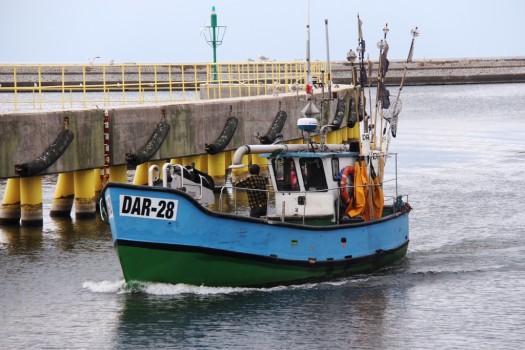 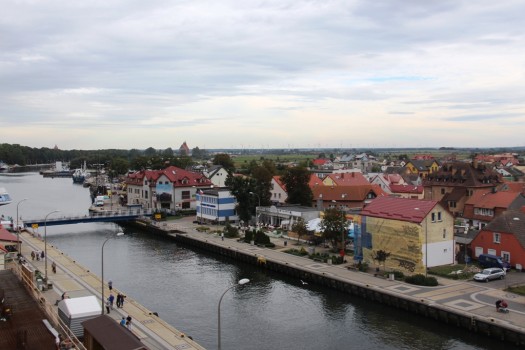 We took a stroll along the main street, eyeing the fast-food joints and souvenir shops that lined the boulevard. Next, we crossed the sliding bridge, passed a building that looks like a prop in Star Trek, and headed for the lighthouse, which afforded marvelous views of the town. We felt like we were on school holidays, or something equally as carefree, as we headed for the harbor arm, on which were five or six fishermen, out to catch a bite to eat. A couple of fishing boats rolled through the gaping mouth of the harbor, as we made our way back along to the far end of the town, in which proudly sat an aged vessel; it resembled the black pearl and was used for boating excursions. 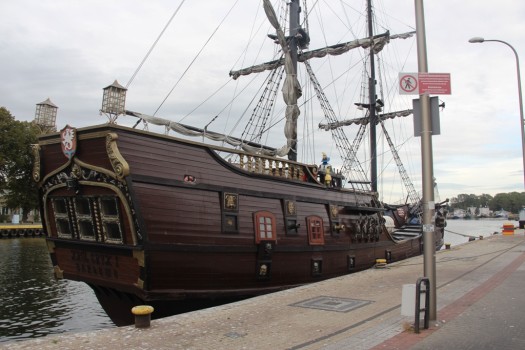 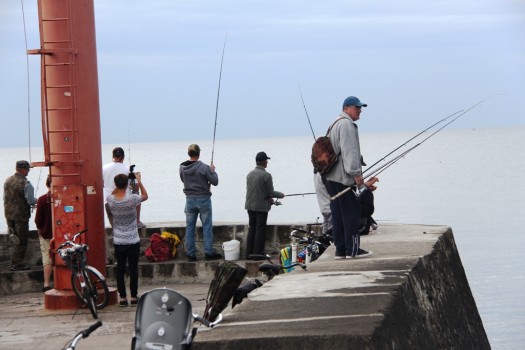 Our relaxed day by the seaside in Darłowo transported me home. I had another really great day in West Pommerania.