We awoke to a frosty paradise. Our peaceful island refuge somehow looked even more beautiful than the night before: a silver, glistening dew coated the grass and reflected the bright sunshine; a heavy mist swarmed the surrounding water; and vivid rays of light seemed to jut from the ground, heading skywards. Witnessing the majesty of the scene early in the morning was an unmissable opportunity. 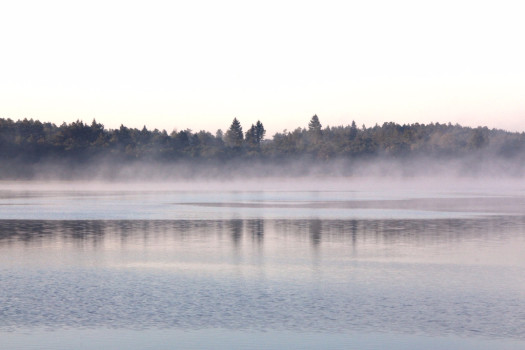 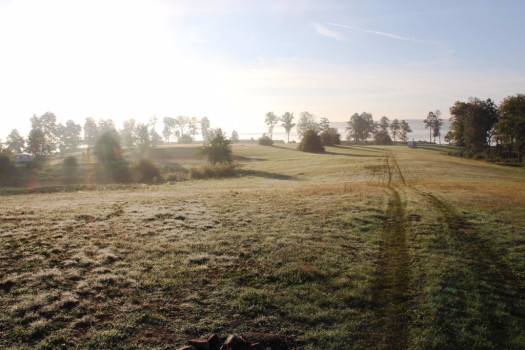 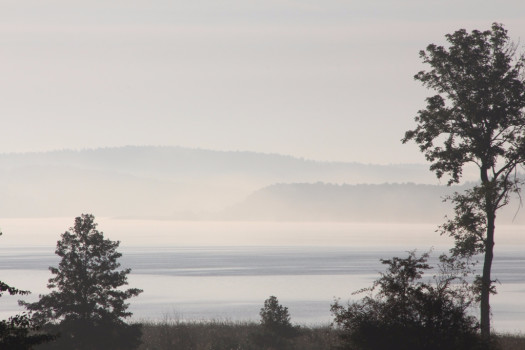 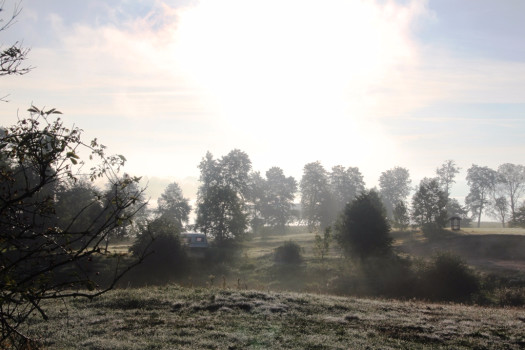 With a calm unease, the car ferry broke the stillness of the water as we headed for the mainland. The frost-veneered road pathed a silvery route for us to follow as far as Złocieniec, where we’d be experiencing the West Pommeranian Lake District at its finest. 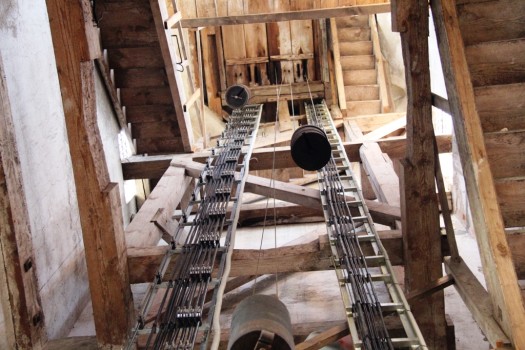 After a short drive, we arrived at the town hall and were greeted by various representatives, who came bearing doughnuts and coffee! With a busy day lined up, we wasted no time in heading for the town’s church, where we’d been granted special access to the top of the steeple. The winding staircase was formed of aging wooden planks, and seemed to creek under our weight. From the base of the tower, you could see near enough to the top, where sat a large bell, which is no longer in use due to concerns over it’s weighty swing. Cobwebs clung to us as we climbed. The top floor was about the size of a bus stop and accommodated our party, although we all had to crouch inside the bell.

From the church, we drove out into the countryside, down narrow lanes flanked by rows of tall trees, until we came to a stunning lake. The crystal clear water was perfectly still; not a single ripple prohibited the view of the bottom. 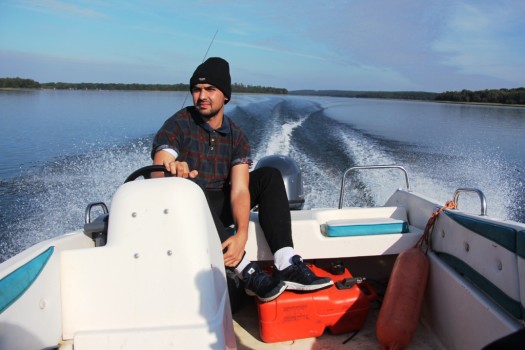 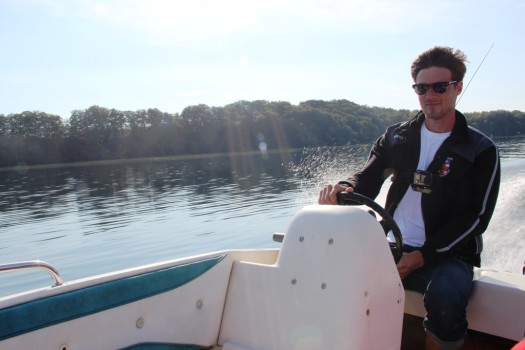 The motorboat that we’d followed to the lake was slowly lowered in from the trailer it was sat on. Fish swam inquisitively toward us, as we eased our way onto the water. We had the lake to ourselves as we sped from island to island, lapping the entire lake a few times before heading back to the mooring. We dropped off one passenger in order to make the boat lighter, so we could increase the pace (and the fun)! Marcin and I took it in turns to drive the boat, hitting roughly 30mph as we swerved to avoid gulls and rocks.

After skimming across the surface of the water, we got under it, with a private scuba diving lesson. The perfect clarity and the array of animals inhabiting the water made the lake a fantastic place to dive. 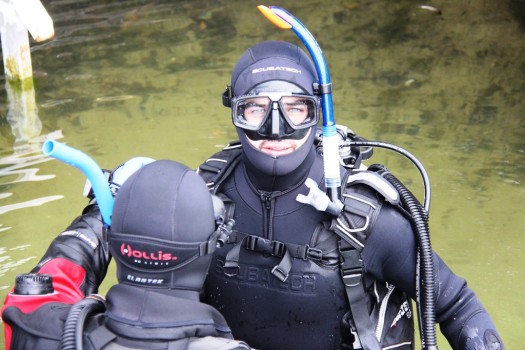 We’d both been looking forward to diving for the majority of the week. While I’d never tried it before, Marcin had worn the equipment once before, but only in a swimming pool. The water was extremely cold, as it infiltrated our wet suites.

Marcin went first. I watched as he submerged under the water, watched as bubbles sporadically rippled on the surface, and watched as, after some time, his head broke the surface of the water and he exclaimed his amazement. My nerves were in pieces: I often get claustrophobic, and I don’t like the idea of wearing weighty equipment, which compresses your body, while deep underwater.

Just a matter of meters was enough for me to decide that it wasn’t my cup of tea. While I loved being able to see the fish and the features that characterised the bed of the lake, I found the sense of claustrophobia slightly overwhelming. It was a great experience, nonetheless, and we were lucky to be able to try the activity in such a beautiful setting. 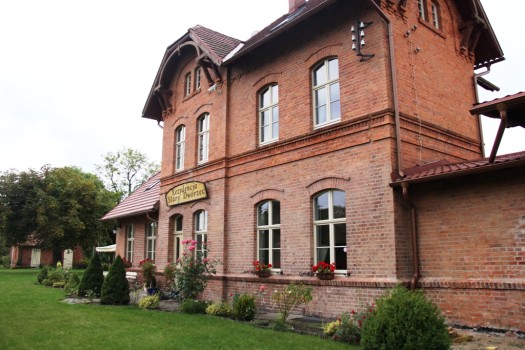 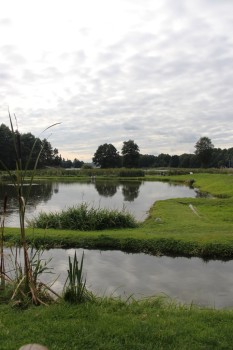 After visiting a converted railway station, which now functions as a hotel, we went for lunch at Ryby Lubie – a fish farm and restaurant that serves up a fantastic meal. I wandered around the various reservoirs, taking pictures and looking at the various kinds of fish that inhabited the murky waters. We were served a delicious trout and didn’t leave a bite.

The clouds cast over, as we hit the road in the direction of Dworek Tradycja – an enchanting cookery school – in Bełczna. Our accommodation for the night, Dworek Tradycja is a delightful property, set in beautiful gardens. A large dog – which better resembled a polar bear – greeted us with barks, as we pulled up to the gates. The interior of the building is decorated with antique furniture and natural decorations. The kitchen, for example, is filled with flowers, wheat, herbs, odd jars of curious foods, and bottles containing intriguing concoctions. Nina Szuba, the owner, has produced a cook book, which contains traditional West Pommeranian cuisine. We were served a sumptuous meal, of a stew-like main, with a side salad. 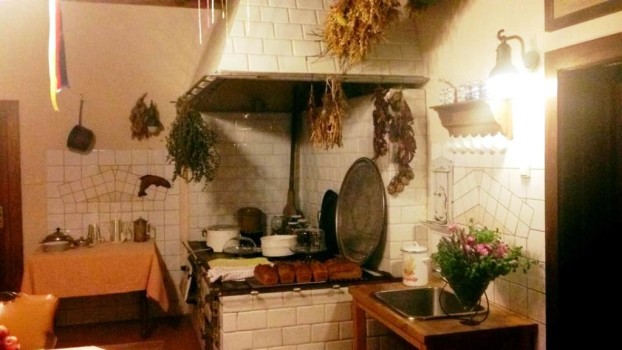 For now, I’m off to bed for a much needed rest!