Today, at Kajtur Event Military Training, Marcin and I were put through our paces in the art of survival. I’m pleased to announce that, in the face of adversity, we prevailed, and are able to share our unique experience with you.

We arrived at Kajtur to an austere looking guy (referred henceforth as ‘the Captain’), who was dressed in army camouflage and was sporting an unkept beard. He had the appearance of an army general, who might demand 50 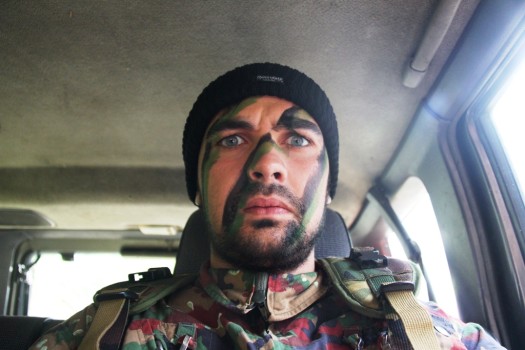 push ups according to his caprice. We’d have been lying if we’d have said we weren’t nervous for what may be in store. Ushered into a log cabin, decorated with medieval weaponry, we were handed camouflage jump suits to change into. Next, the Captain smeared black and green paints across our faces. We would be entering a legitimate military zone; apart from not having a gun and an enemy, we were practically going to war, or so it felt.

We were transported by 4×4 across a grassy marsh-land, past a sign that ominously read something along the lines of ‘do not enter – military zone’. The first lesson would be an exercise in abseiling; a steep muddy verge, which sank into a densely wooded area, was to be our classroom. Attaching two ropes to two trees at the top, the Captain beckoned us forward to descend the steep incline, one at a time. Both of us successfully managed to do so, learning how best to place the rope to support one’s weight. 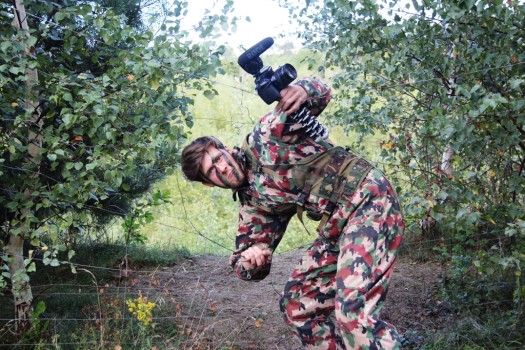 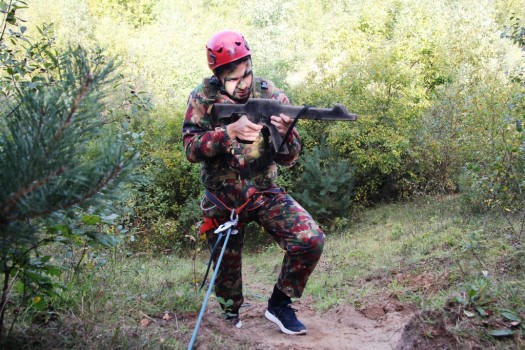 At the bottom, once joined by the Captain, we hacked our way through thin trees, branches and long grass, until we came to a clearing among the trees. Here, our survival skills were really put to the test. We were given a hypothetical scenario: we’d become stranded in the woods, and had to build shelter and a fire to keep us safe and warm for a 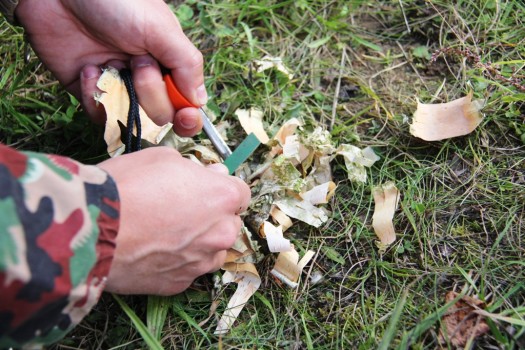 matter of days. The shelter was to be formed of sticks leaning against horizontal support – a kind of ramp under which we’d sleep. The fire, we were told, would be placed in front of the shelter to maximize warmth. Marcin and I built a sorry excuse for a shelter, before moving on to the fire.

In the Captain’s satchel was an array of survival essentials, including knives, a magnesium flint, and tampons… Using the flint and a tampon, he proceeded to light a fire with ease. We’d all be saved, then, as long as we had these vital tools of survival… The next challenge involved setting fire to tree bark, which proved to be slightly trickier, although this also erupted into flames after several attempts.

With shelter and warmth, the next obvious concern was that of unexploded landmines, naturally. Using a metal detector and a steel prodding device, we located the dangerous explosive and dug it up. This came after our woeful attempts to bury the weighty metal object. It’s safe to say that the enemy would have spotted our trap from Szczecin! 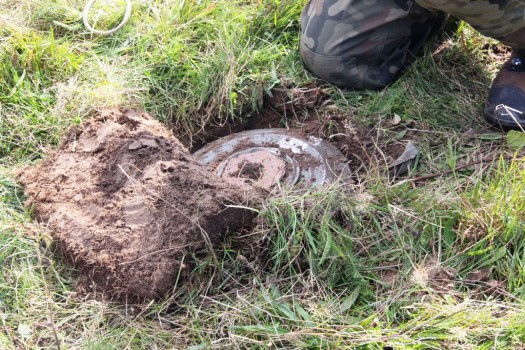 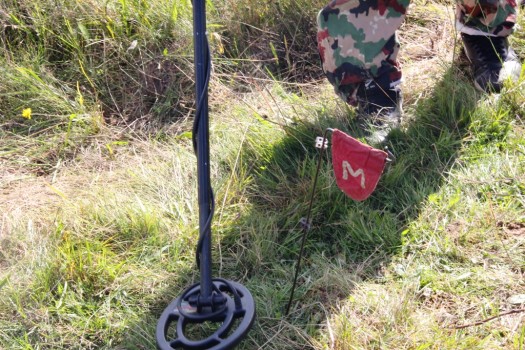 Feeling fully prepared for the most treacherous of survival scenarios, we returned to the Kajtur compound to practice some more active forms of survival i.e. being hoisted up a towering tree to fall back to Earth on a speedy zipwire! Although i can’t imagine when this would save my life, the experience was great fun. 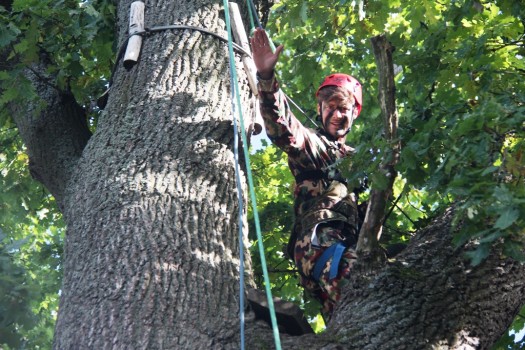 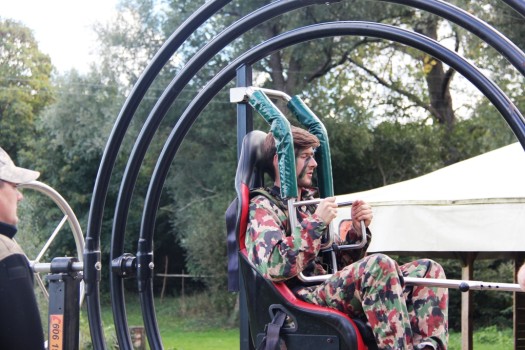 The same can be said for the next activity – the gyroscope, which hurls the body in all manner of directions and induces a dizzy, disorientated sensation. We took it in turns to be spun, only lasting a short while before calling time and quickly getting off.

Our physical fitness was next to come under scrutiny, with a timed assault course: We started over a hurdle, then went through an underground tunnel, through some tyres, along a tightrope, before using the rope-swing to cross a trench, crawl under barbed wire, before arriving at a shooting test. With patience, we then had to hit four targets with a gas powered air rifle, before throwing a grenade into a large tyre. This was my favourite part of the day. 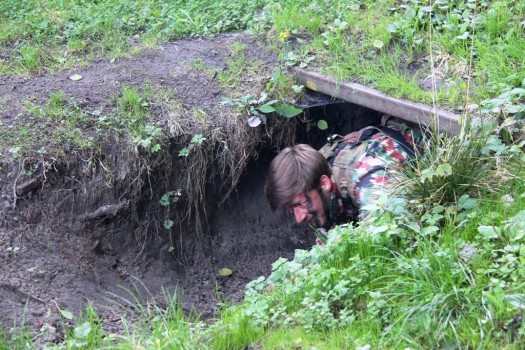 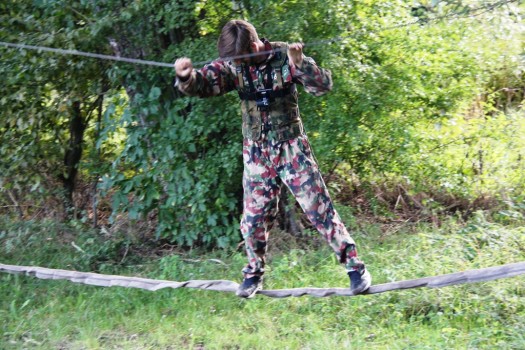 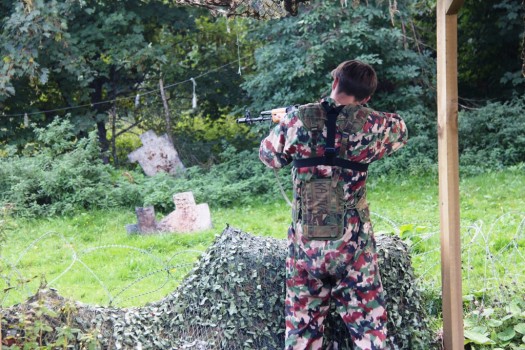 After a quick go at climbing, we concluded the day with that Polish delicacy that we all know and love – pizza!

The afternoon involved all manner of dangerous activities from axe throwing to spear chucking, but the final activity of the day had us holding on for dear life! We left the compound once more, heading for the woodland on a large military truck, which exhaled black smoke as it climbed up and over the rough terrain. We snaked our way around 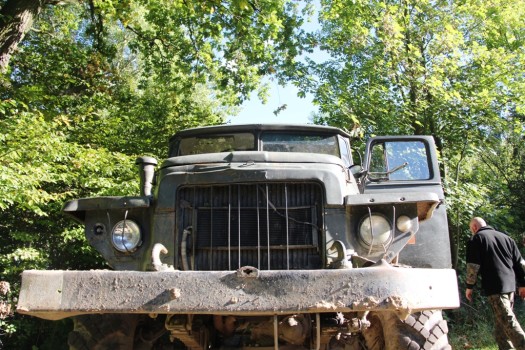 muddy bends and, at times, felt as if we might tip over in the heavy vehicle. We even had a go at steering, which was much harder than it looked!

All in all, our time at Kajtur Event was fantastic! It was so interesting to learn how out of touch I am with nature, but hopefully my survival skills are now a little more honed. 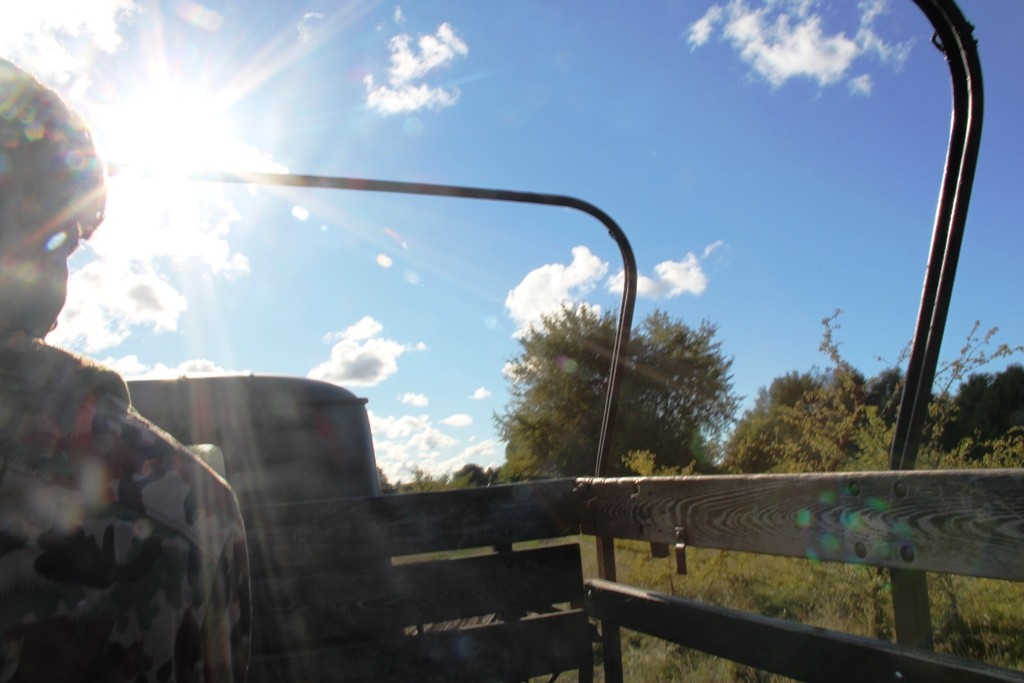