The sun sat high in the sky, the birds sang gaily in the trees, and we were on our way to more adrenaline-pumping military goodness this morning, before, like a bolt out of the blue, Marcin and I were pulled over by armed military policemen! 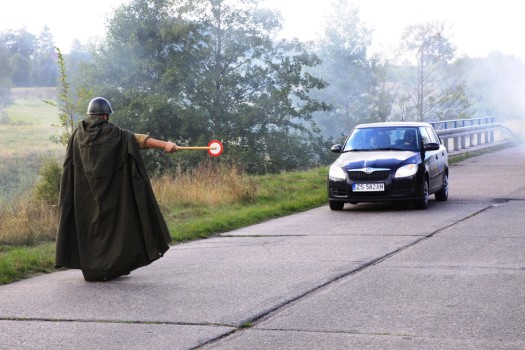 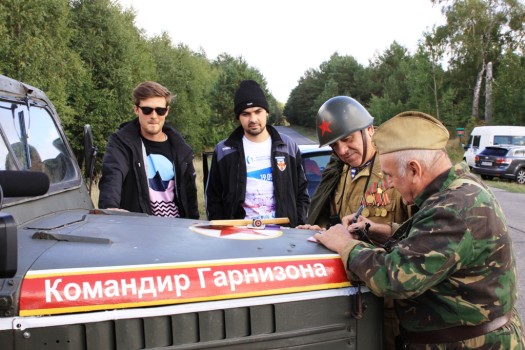 A smoke grenade was released and began to mist the road. After being flagged over by an officer wearing a stern expression, and with visibility low, Marcin had no choice but to bring the car to a halt on the verge. Two further armed soldiers secured the road ahead. Parked in front of us was a vintage land rover, in army green. The officer, accompanied by a smaller man of lower rank, approach our car and 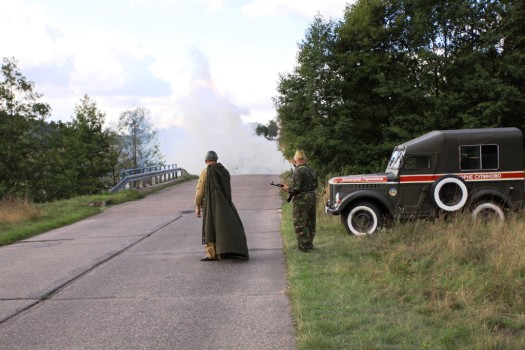 motioned for us to wind down the windows. Heart pounding and confused, I slowly did so. The officer seemed angry, and, from what Marcin could deduce, he was shouting in a severe Russian accent. We were then made to leave the vehicle and produce documentation, before being searched.

It was a simulation, of course; the actors were recreating a Soviet roadblock, as it may have been experienced following WW2. The officers wrote us replica Soviet passes and we continued on our way. Our dramatic start to the morning was an insight into what we could expect from the final day in Borne Sulinowo.

Joined by two television crews, we had an extremely busy schedule
ahead and were accompanied back to the hotel by a convoy of cars. We were then provided with camouflage dress and a shot of vodka before lunch, which was taken in true Polish style – with gherkins. 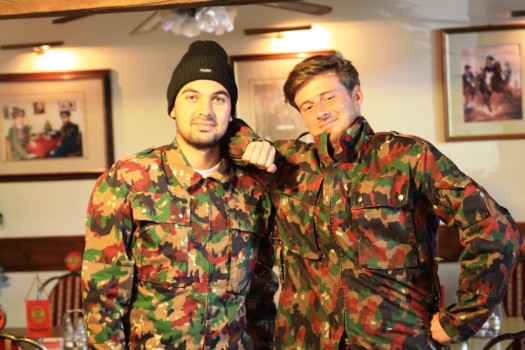 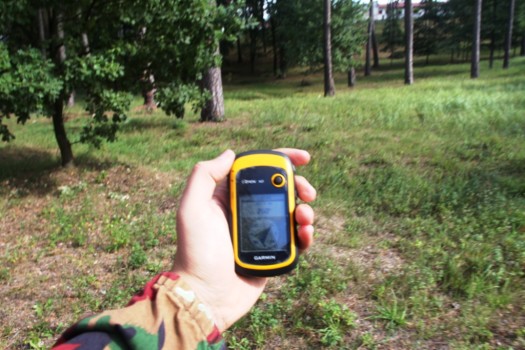 Dressed in fitting army attire, we were handed a compass and prescribed instructions to rendezvous at a nearby location, where we’d be met by a truly awesome machine. We departed, chasing the arrow of the compass through forest land and through the suburban streets of Borne Sulinowo. 100m, 90m, 80m. As the figures on the electronic compass slowly decreased, our excitement and curiosity escalated. 50m, 40m, 30m. We crossed a clearing, practically running to catch a glimpse of what we’d meet. 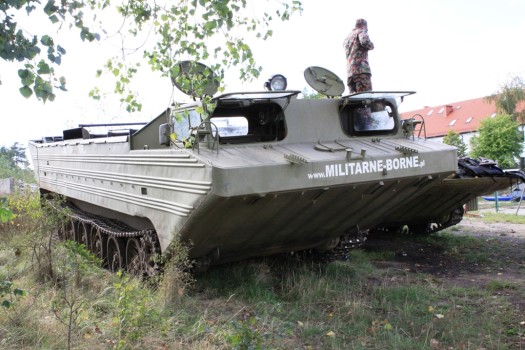 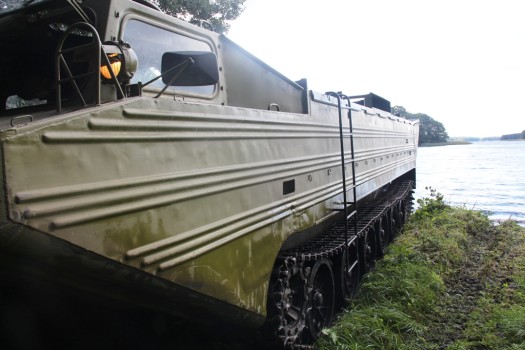 Just before the compass hit zero, we finally beheld the beast: a huge amphibious tank! Capable of carrying 72 armed soldiers, or a 10-tonne vehicle, the giant machine felt indestructible and could conquer most terrains, in addition to the rough waves of the sea. A small cabin at the front of the vehicle accommodated a driver and one passenger, while the exposed deck could bear the strain of a whole platoon. 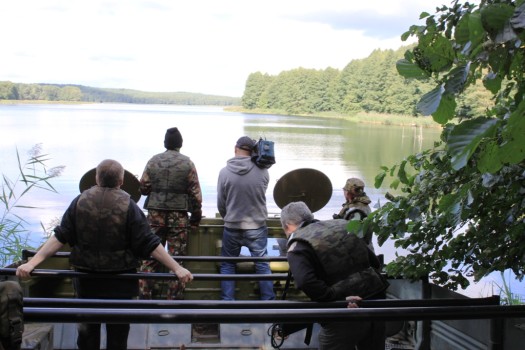 Marcin and I jumped on boar, followed by the television crews, other Az Po Morze team members and some local guides from the area. We held tightly, as the beast fired into life and proceeded to maneuver its way through a tree-littered field and down a muddy track, toward the nearby lake.

I knew what was coming – that soon we’d hit the water – yet the sensation of floating in such a substantially sized land vehicle still took me by surprise. The treads became paddles, and we were soon cruising out way through the water, heading for the deep centre of the lake. Kamil killed the engines and we fell into serenity once again; the peacefulness of the lake was emphasised by the almighty ruckus of the tank. 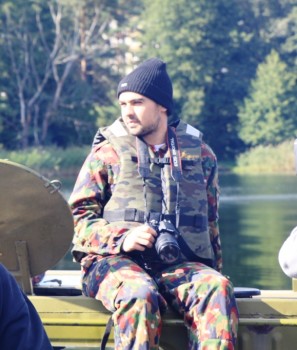 We sailed for a short while, before heading for a bank on the far side of the expansive lake, at which point the amphibious vehicle effortlessly climbed onto solid ground. A military truck awaited our arrival, and took us to a nearby German bunker, which was constructed in 1933 and formed one of the many bunkers in the Pomeranian Wall. A network of narrow, underground tunnels, which amounted to a total length of 400m, joined different sections of the bunker. We slowly made our way through the dark space, with only battery torches and the flash of the cameras to illuminate our way. I really enjoy learning about the history of a destination, and so Borne Sulinowo most definitely captured my interests. 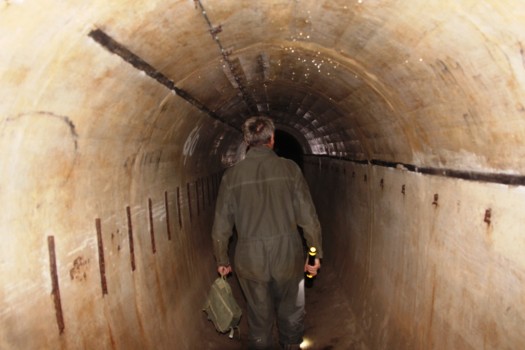 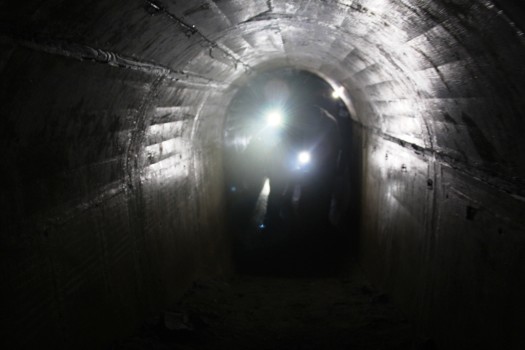 After the bunker, we took the amphibious tank back across the lake, and, as dark clouds began to gather, we headed for the location of yesterday’s tank ride. 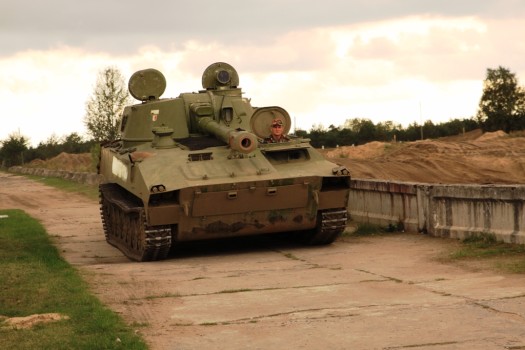 At the far end of the tank track lies a dilapidated building, in which is a makeshift paint balling arena, constructed from sandbags and mounds of earth. Still wearing our camouflage outfits, and making a dramatic entrance courtesy of yesterday’s Soviet tank, we ducked, slid and dived our way to bruises, scrapes and grazes. From six initial players, I was left in a tense one-on-one stand-off with the instructor. My aim was true, however, and I brought it home for the green team! The game was exhilarating, to say the least; my heart was still hammering on my rib cage as we headed back to Gościniec Rossija for dinner and evening activities. 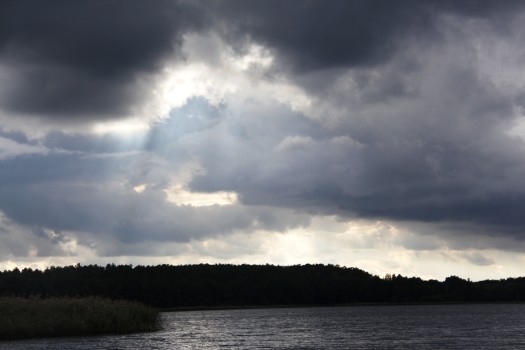 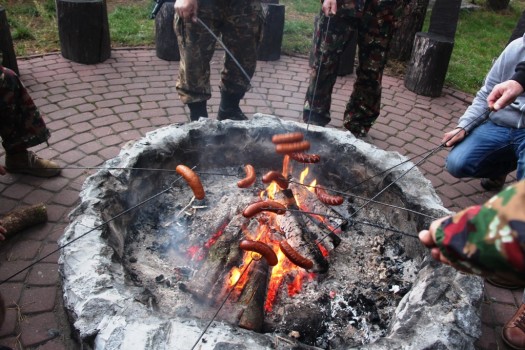 Food was served in an authentic army mess tin, comprising a chic pea broth and a Polish sausage – cooked over an open fire. It was delicious and greatly appreciated. 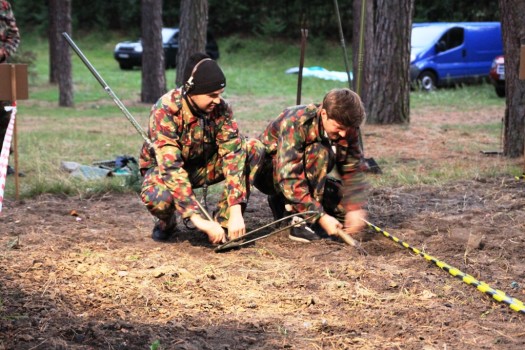 The light began to fade, but we were by no means done. Buried beneath sand next to the hotel were three replica landmines. Marcin and I took it in turns to use an antique mine detector to locate their whereabouts and dig them up, with the high pitched buzz of the metal detector guiding us. With each excavation was a loud bang. The third beep of the detector led us to unearth an object which resembled some for of time capsule, and contained a bottle of vodka shaped like a shell.

Finally, to end a fantastic day in Borne Sulinowo, we were let loose with a gun! It was of the pellet variety, however, but it was still so fun nonetheless. I must have played too many Playstation games as a child, as my aim was pretty accurate: each of the three targets had a hole pierced through the middle. 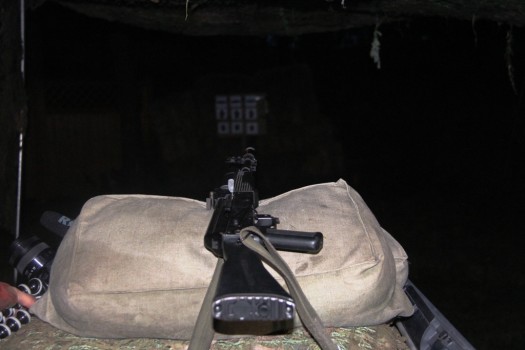 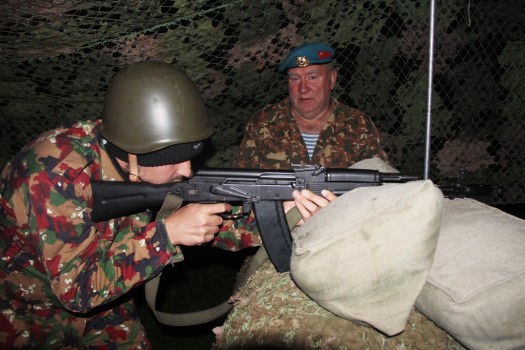 The day was rounded off with a presentation of Soviet medals – it felt like some ritualistic initiation. We spent a while longer sitting by the fire and reflecting on what a marvelous day we’d been treated to. I’m disappointed to be leaving Borne Sulinowo – it’s a fascinating place, due in part to the new military-based attractions on offer, but mainly due to the turbulent years that have led to now.