We were feeling excitable, happy and adventurous as we extended our tour of West Pomerania beyond international waters. Our destination was Ystad in Sweden, but, to arrive in one piece, we first needed to navigate our way onto the boat at the Unity Line ferry terminal, avoiding the oppressive revs of the numerous lorries that chased us on. 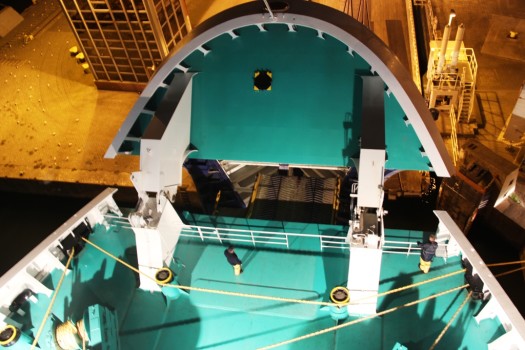 Once on board, we made our way to our cabins. I’ve never slept on such a large boat before, the whole experience made me feel like an explorer on a grand voyage. The room was compact, as could be expected, but it had an en-suite shower room and a porthole – very cosy! We were expecting to leave at 11:00pm for a 6:30 arrival, which would 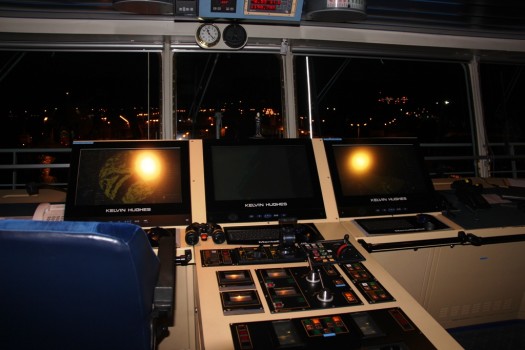 provide ample time to explore the ship. We were even granted access to restricted areas.

Moments before the departure, we met a representative of Unity Line Ferries at reception, who escorted us to the Captain’s Bridge. Marcin and I both gasped as we entered the glass-fronted room; the view was spectacular! The entire dock, which was illuminated by the glow of thousands of lights from other ships, was visible from where we stood. We took a walk around the outside balcony, which extends beyond the width of the boat. From here, the captain controls the whole ship. The Captain was a stern gentleman; the pressure of his job was evident in his demeanor. 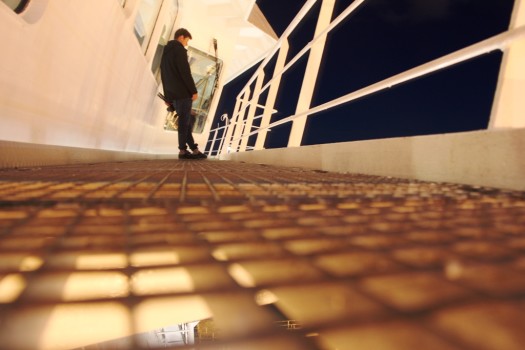 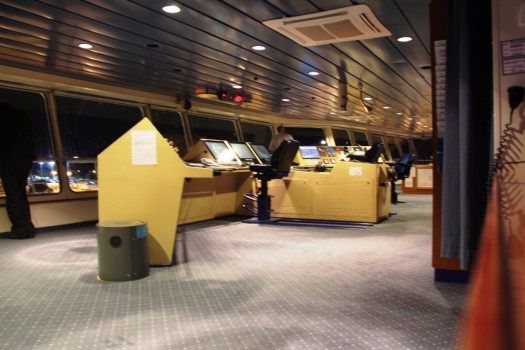 The lights went out as the rumbling engines began to propel the ship backwards, out of its bay in the dock. All felt tense in the control room and nobody ushered a word, except the Captain. Gradually, the vessel edged its way into 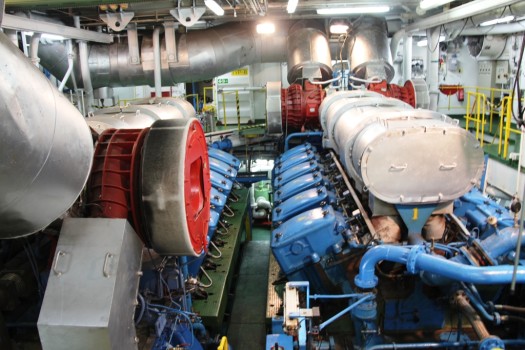 open water. We crossed paths with a different ferry, which was amazing to see from such an angle. The sheer size of the boats is best appreciated from the Captain’s Bridge.

We then descended to the lower depths of the boat, where the engines roared with power. The two most noticeable aspects of the engine rooms was the heat and the noise, which both reduced the length of our stay. In appearance, the engine was similar to that of a car engine, but the scale was roughly 20 times larger. Marcin and I were bewildered by the thousands of buttons, switches and dials, but their rhythmic flashing made for a hypnotizing spectacle.

After a beer in the bar, which, aside from the various sleeping gents, was bear, we headed for the blustery deck. The wind was overbearing, but the sight of the shrinking coastal lights was phenomenal. 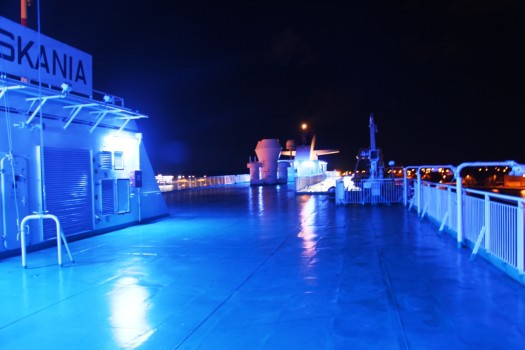 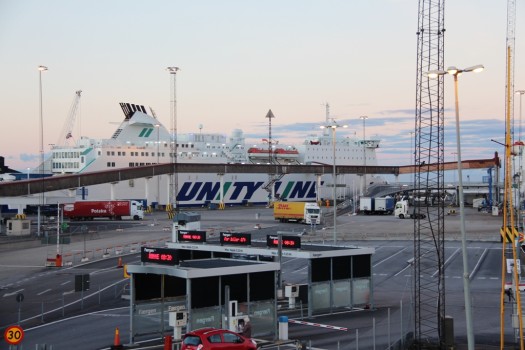 We slept until we were awoken by a routine siren, which signaled that we’d soon be docking in Ystad. After breakfast, we made our way back down to the car deck, where our bikes were waiting for us. We rose to the challenge, and, on a chilly September morning, we found ourselves in the main square of Ystad. Our only company was a single market trader who had started to unload his goods. The sun was slowly rising above the buildings and heating the square; dewy, bright flowers decorated the area, making the whole town seem extremely 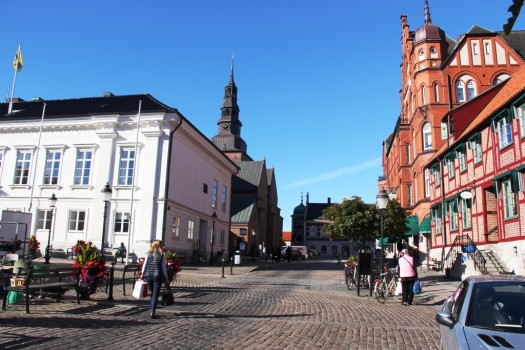 pleasant; and old, but attractive, buildings lined the cobbled roads. It was a stunning introduction to Sweden.

While the plan for the day was relatively vague, and left up to Marcin and me to decide our schedule, we were certain that a bike ride would be on the cards; the destination would be Ales Stenar – an artificial rock formation, created in the bronze age, which was 15km from Ystad.

After a hot chocolate and a power nap in an accommodating cafe, we set about finding the best route out of the town. Guided by a cycle path, packed up like a mule, we began the grueling ride that would take us hours. We passed field after field, with the clouds hanging like cuttings on a page. At one point, a bird of prey swooped for a catch just meters from us. 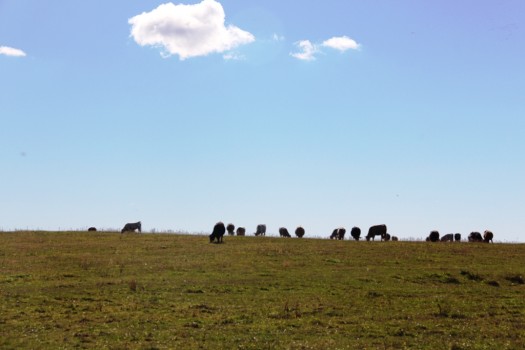 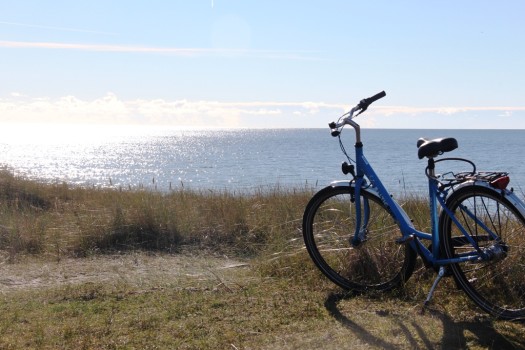 After an eternity, we reached the historical monument, and were at once stunned by the beauty of the location. The rocks themselves were not the main attraction, although certainly impressive; our attention was captured by our remarkable surroundings. Ales Stenar is a primitive calendar, noting the positioning of the sun at certain points throughout the year, and an ancient location for ceremonious festivities. 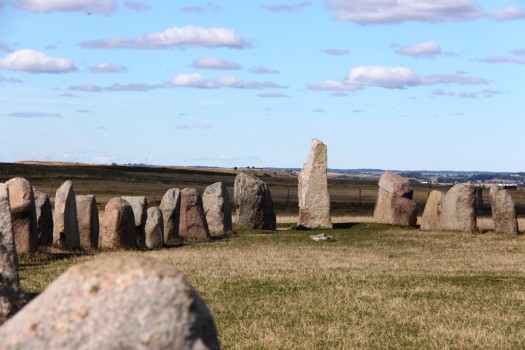 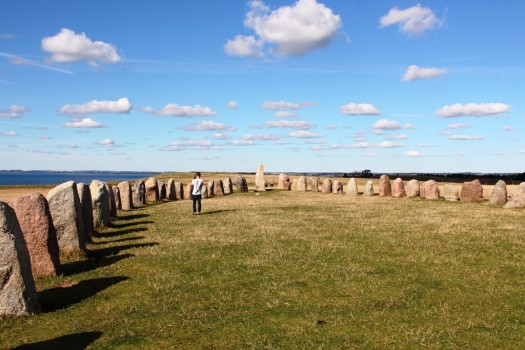 We tiptoed around the sheep’s mess, batted away the attacks from thousands of flies, and took many pictures, before hitting the road once more to return to beautiful Ystad. The sun shone hot on our backs for the whole journey; the sky was a vivid shade of blue. 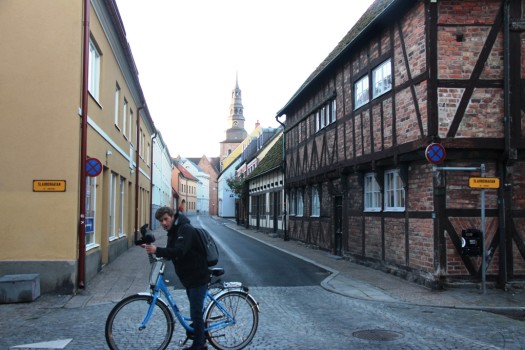 Although our time in Ystad was short, we had time enough to explore the maze of roads surrounding the central
square and form the conclusion that is was a wonderful place. Despite a real lack of sleep, we’re keen to explore the Unity Line ferry on our return to Poland this evening.